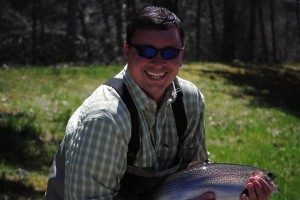 Eugene is the head guide of our staff.  He was raised on a small farm bordered by the Great Smoky Mountains National Park in Bryson City NC, later moving to town where his home was on the banks of the Tuckasegee River. He started fly fishing at the age of 6, and has spent his entire life with fly rod in hand, exploring the waters of the Great Smoky Mountains National Park, the Nantahala River, and the Tuckasegee. Some may say it was time wasted, however Eugene insists that it has been time well spent.  “Fly fishing has taken me to some of the most beautiful places in the world, and along the way I have made so many friends who all share in my passion of chasing fish with a fly rod.”  Eugene has fished numerous destinations across the US, Mexico, and the Caribbean. To date, he has caught 84 different species of fish on a fly rod.

Eugene is currently guiding his 16th year, and has guided well over 4,600 clients. He has floated the Tuckasegee River more than any guide in the area, having guided over 1,600 float trips just down the Tuckasegee River.  He enjoys sharing his knowledge and passion for fly fishing with his clients, and cherishes sharing the moment of catching their very first trout on a fly rod. “Everyone always remembers the first fish they caught on a fly rod, it’s exciting  for me to share in that experience with the folks who fish with me. At the end of the day, it’s my hope people refer to me as their friend, not just their guide. A great guide must be someone who can not only put you on fish but, is a great instructor who teaches you and provides encouragement. In addition to this, they must be a great companion, someone you wouldn’t mind spending a day on the water with”.

Eugene is also a competitive fly angler, and has competed in numerous fly fishing competitions all over the US. He has won many events, and set a couple state records in the process. He currently holds the NC State Record for Distance Fly Cast set with a 9′ 5 wt fly rod that sent a fly 114 ft.  He has competed in numerous Fly Fishing Team USA National Fly Fishing Championships, and Regional Qualifiers, and has won numerous regional events. His latest competition was the inaugural Musky Fly Fishing World Championships where he finished a solid 4th place. He is a current and active member of the Federation of Fly Fishers, and Trout Unlimited.

Eugene has built an extensive resume in the fly fishing world. He has appeared on numerous television shows on the following networks, OLN/Versus, The Sportsman Channel, Fox Sports South, UPN and UP40 Networks. He has also been in many publications including Fly Rod and Reel Magazine, Fly Fisherman Magazine, North Carolina Sportsman Magazine, Smoky Mountain News, Smoky’s Travel Host Magazine, Montgomery Style, and numerous local and regional newspapers.

When not on the water, Eugene enjoys spending time with his wife and two children sharing their love of the outdoors near their home in Bryson City. 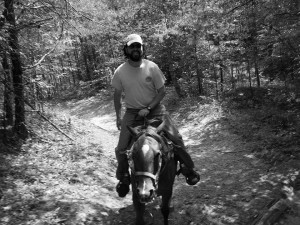 Hank has spent countless years as a Fly Fishing Guide, White-water rafting Guide, and Kayak Instructor on the Nantahala River and surrounding gnarly whitewater rivers all over the Southeastern US. Hank is a competitive fly angler and can regularly be seen tearing it up on the competitive fly fishing circuit all over the US.

A day of the water with Hank is great experience. His laid back, easy going nature makes him the perfect instructor for the beginner, and his competitive edge and keen sense of surroundings and conditions make him a perfect guide for the experienced. His fly patterns and techniques are innovative and will keep you on the fish all day! 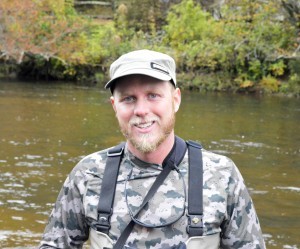 Chris was born and raised in the small mountain town of Andrews North Carolina.

He is currently finishing up his Nursing degree at Western Carolina University and will be a licensed RN at the end of May. Chris also holds two other degrees from WCU.

He is an avid sportsman and loves to fly fish and deer hunt, both of which he excels equally! Chris has spent 7 years as a Fly Fishing Guide, and Rafting Guide on the Nantahala River. Chris has spent countless hours exploring the Nantahala mountains, which are some of the most rugged in the east. He knows the woods and water there like the back of his hand. Chris is also one of the best on the Tuckasegee River, catching some  of the biggest Rainbows and Browns on the river.

Chris is very professional and courteous, his laid back easy going nature makes a perfect guide for anyone with children and beginners. His passion for adventure and prowess in the outdoors make him perfectly suited for those looking to get in the “back of beyond”

A day on the water with Chris Myers will be full of adventure and fish! 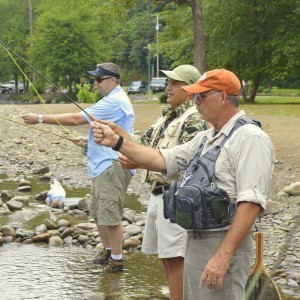 Nat grew up in Bryson City North Carolina and has over 50 years of fishing experience in the beautiful trout streams of the Great Smoky Mountain National Park and Nantahala River. Nat comes from a long respected family history of avid fly fisherman and sportsman in Western North Carolina, and East Tennessee.

Nat’s courteous and down home attitude, and miles of patience will give you a day on the water that will be friendly and fun, and full of fish. Nat is excellent with teaching beginners and children to fly fish, and without a doubt can teach even the most skilled anglers some new tricks!
So, pull on your waders, lace up your boots, and spend an unforgettable day fishing with him in the Smokies. 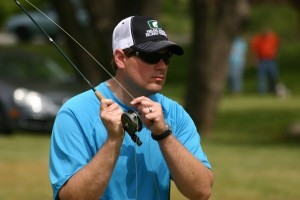 Chris Lee was raised on the fabled trout waters of Deep Creek in the Great Smoky Mountains National Park. Chris has been avid fly angler his entire life.  His passion for the sport led  to competitive angling, where in 2004 Chris along with team mate Eugene Shuler reached the semifinals of the Fly Fishing Masters Tournament. From there it was just a matter of time before he started surging to the top of the leader boards in the sport.

Today, Chris is a recognized as a seasoned veteran on the competition circuit and has competed in multiple National Fly Fishing Championships.  In 2011, Chris earned his spot on Fly Fishing Team USA and represented the US at several national and international events. In the spring of 2012, Chris became an assistant coach for Fly Fishing Team USA Youth, and lead team to a silver medal performance in France in 2012 and a Gold Medal in Ireland in 2013.

Chris has an incredible personality, his never ending smile and easy going nature make him the perfect guide and instructor. 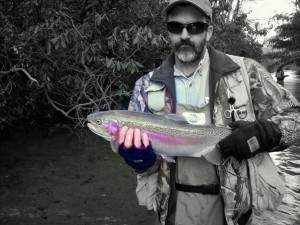 Alan is a true mountain man in every sense.

A current Professional Bass angler and savy outdoors-man, you’ll be hard pressed to find a better guide when the going gets tough. Friends of Alan’s and our guides will tell you that he would catch a fish from a mud-hole, and little puddle at that! Alan has been guiding for Fly Fishing the Smokies for nearly 10 years. Along that time he has become indispensable on our Back-Country Camping Trips and our most rugged of trips into the Smoky Mountains. Alan is a very patient guide, and one that will put you on fish in no matter the conditions.

Alan was a Fire Fighter for the US Forest Service for many years and has spent time fighting some of the largest wild fires this country has ever seen. He is tough as nails, and is as comfortable in the back-country as he is fishing public water. Alan’s skills in fishing are to be matched, both in competitive bass fishing and competitive fly fishing, Alan has traveled the country and competed against the best in the business, many times coming out on top! He was one of the founding members of the North Carolina Fly Fishing Team,and a two time qualifier for the Team USA Fly Fishing National Championships.

A day on the water with Alan is unforgettable! 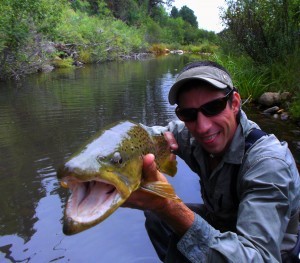 Jason is new to our guide staff for the 2014 season, but is no stranger to the art and science of fly fishing. Thanks to his father; David Meszaros, Jason took up fishing at a very young age. As an Atlanta native, Jason spent many of his younger years exploring the trout streams in the mountains of northern Georgia.

Jason studied the aquatic sciences while attending Virginia Tech University, graduating with a Bachelors Degree in Fisheries Science. The numerous limestone spring creeks served as excellent laboratories for developing and testing hatch-matching patterns for wild trout. Jason absolutely thrives on sharing his enthusiasm and knowledge of aquatic insects and fish with his clients, especially kids.

Jason has spent nearly two decades working in the fly fishing and outdoor retail industries. Jason also created The Drag Free School of Fly Fishing while living in Arizona, where he taught customized fly fishing and fly tying courses to clients with a wide spectrum of skill levels. Whether you are a total beginner or a long time angler looking to improve your “A” game, Jason will always take the time to patiently help you improve your skills on and off the water.

A day on the water with Jason is sure to be an adventure worth repeating! 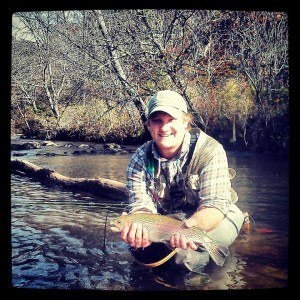 Jared is new to our staff for the 2014 season and also the youngest, but don’t let his young age fool you. Jared was born in Gastonia, North Carolina but spent much of his childhood fishing the rivers and lakes of Northeast Tennessee. He credits his Grandfather and Uncle for laying the foundation needed to become the successful angler he is today. Fishing is a family occupation as his Uncle owns and operates a fishing and boating outfitter in the hills of Tennessee which is how Jared’s love for the art of fly fishing and trout came at a very young age while fishing the banks of the infamous South Holston River.

He is currently an undergraduate at Western Carolina University which has allowed Jared to spend countless hours honing his skills and fly fishing many of the fantastic streams Western North Carolina has to offer. Jared spends more time fishing local streams in a month then many people spend fishing in a lifetime. While being mentored by Fly Fishing the Smokies very own head guide Eugene Shuler, Jared has the experience to provide you with an excellent fly fishing adventure. Being patient, fun and the true southern gentleman that he is, a day on the water with Jared will be a memory that lasts a lifetime!